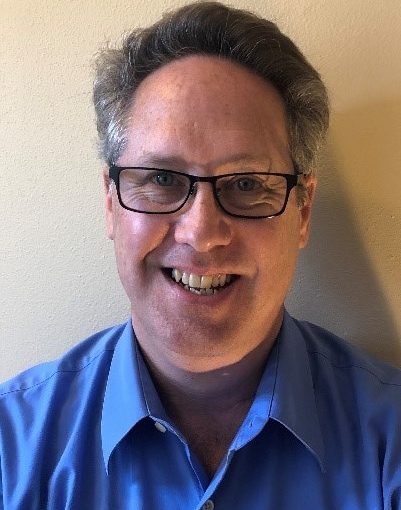 Oak Grove Presbyterian is pleased to announce the election of Bart Roush as our new Pastor/Head of Staff, starting on Monday, May 17. Welcome Pastor Bart!

Pastor Bart will join us on Zoom at Coffee Hour on Sunday, May 23. Please plan to Zoom in at 12:00 noon to chat with Pastor Bart.

We asked Pastor Bart to tell us about himself and his family, and he sent us the following biography.

I was born and raised in Cincinnati, Ohio and grew up as an active youth member of Pleasant Ridge Presbyterian Church. As a senior in high school, and as the Moderator of my youth group and a youth Elder on Session, I preached for the first time during Youth Sunday, and it started a long tradition of not finishing sermons until late on Saturday night (much to the chagrin of my youth leaders then and my wife now). While in high school, I felt the initial stirrings of a call to ministry but decided to pursue theatre in college.

I attended Wright State University in Dayton, Ohio and graduated with a B.F.A. in Directing and Stage Management for the Theatre. After college, I moved to the Twin Cities to pursue a theatrical career. My work in theatre was primarily behind the scenes as a Stage Manager and Managing Director. While working in theatre at night and on the weekends, I worked at Ameriprise Financial Services by day, and worked there in a variety of positions for almost 10 years. I enjoyed both my day job and work in the theatre, but in my late 20’s began to feel the tug of ordained ministry once again.

While working box office for a theatre, I overheard one of the actresses in the show, Kelly, talking about her church, First Congregational Church of Minnesota. I had begun looking for a church home again, and I asked if I could visit the church with her some time. I went a couple of times, and immediately felt at home. Kelly and I went to lunch one afternoon after worship, and she became very serious. She told me in no uncertain terms that if I was coming to church just as a means to try and date her, that I “should stop now. Church is very important to me,” she said, and I should “not mess with it.” I assured Kelly that I was, indeed, interested in finding a church home. Once that was made clear, I then asked her out on a date. We were married at First Church about two years later in 1999. I proposed to Kelly on a trip to Mexico, and after she had already said “Yes,” later that day I told her I thought I wanted to go to seminary. She looked at me for a moment and then said, “Honestly, I always thought I would marry a pastor.”

I began attending United Theological Seminary of the Twin Cities. Having grown up Presbyterian but coming back as an adult to the United Church of Christ, I was uncertain the denomination in which I should seek ordination. Ultimately, I decided to “come home” to the Presbyterian Church because of several reasons; the connected church polity and belief in the priesthood of all believers, the emphasis on an educated clergy, and the opportunity to work within a system to move it toward a more inclusive posture.

I graduated from United in 2003 and accepted my first call to Fox Valley Presbyterian Church in Geneva, IL as the Associate Pastor for Adult Education and Mission. I specifically sought a call as an associate pastor to gain experience in a congregation served by several pastors so that I could work with experienced clergy as I formed my pastoral understanding and identity. I served at Fox Valley for 10 years in that capacity. During my time at Fox Valley, I greatly enjoyed the many adult education classes I led, shepherding the Stephen Ministry program, and increasing our mission involvement. Mission giving and mission projects increased, including a monthly community dinner that was free to all, and the establishment of several on-going relationships with churches and community organizations in Guatemala where we helped the community install Living Waters for the World water purification systems. Toward the end of my time at Fox Valley, I helped lead the effort to design and build a new education building to facilitate emerging and future ministry needs and opportunities.

In 2007, I enrolled in the Congregational Mission and Leadership Doctor of Ministry program at Luther Seminary, and I completed my degree in 2012. My thesis focused on ways to incorporate adults into congregational membership with a missional understanding. In 2013, feeling the nudge of the Spirit, I accepted the call as Pastor and Head of Staff at Madison Square Presbyterian Church in San Antonio, Texas, a progressive, More Light Congregation. While at Madison Square, we entered a season of discernment which led to focusing our efforts over the last several years on small group ministry and beginning the work of becoming an anti-racist congregation.

In addition to serving these two congregations, I have served the wider Presbyterian church in several capacities, including as chair of the Personnel Committee for Blackhawk Presbytery, serving as a member on a Synod Permanent Judicial Commission, as chair of the Board of Trustees for Mission Presbytery, as a member on the Examination Committee for Mission Presbytery, and as a member of the Network for Dismantling Racism of the Synod of the Sun. I have also been involved in the local community serving as a board member for Classic Theatre of San Antonio (where, eventually Kelly served as Executive and Artistic Director), and as a member of the Interfaith Community Action Network of San Antonio.

Kelly and I have two teenage children, Hera (she/her/hers and who prefers to be called “H”) who is 16, and Olivia (she/her or they/them) who is 13. They love reading, nature, and both have curious minds and kind hearts. We all love to travel and look forward to the day when that is possible again. I enjoy attending theatre and have led several “Theatre and Theology” trips to the Stratford Theatre Festival in Canada. I also enjoy riding my bike and look forward to the trails in Minnesota. I was named after Bart Starr and, while I am a little afraid to tell you this before the congregational vote, I am a diehard Green Bay Packers fan.

I love being a pastor and can’t imagine doing anything else with my life. In fact, I was given the same advice when going to college for theatre, and when going to seminary to become a pastor – “If you can do anything else; do that!” I’ve never regretted heeding the call to ordained ministry. I am excited about the future of ministry together with the people at Oak Grove Presbyterian Church. I am energized by Oak Grove’s commitment to inclusion, social justice, and mission. Kelly and I, in particular, are excited to return to the Twin Cities, and the entire family is looking forward to living in a place where you can experience all four seasons, even winter. 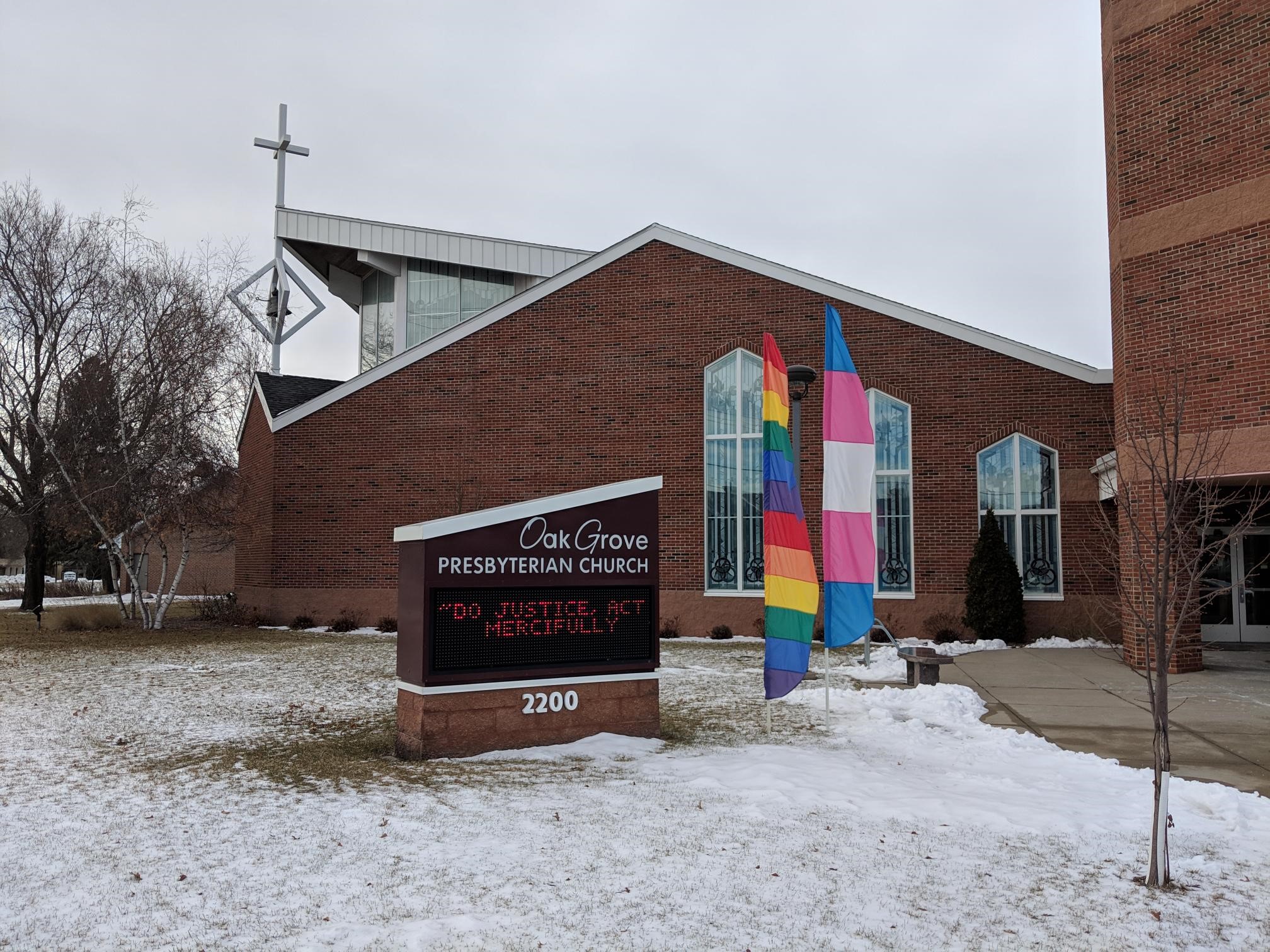 BIG NEWS!!! The Session of Oak Grove Presbyterian Church has called a congregational meeting for noon on March 14 via Zoom for the purpose of presenting and electing a candidate for Pastor/Head of Staff.  The meeting will follow the 10:45 Virtual Worship Service where the candidate will preach.

On Saturday March 13, a Zoom meet and greet will take place with the candidate. Oak Grove members will be receiving  a biography and background  of the candidate in the mail. The Pastoral Nominating Committee is joyfully  looking forward to introducing Oak Grove to this candidate.

The Pastor Nominating Committee (PNC) has completed first and second interviews and is working diligently to advance the search for our next pastor. The process is proceeding smoothly thanks to the efforts of our PNC, whose members include Paul St Martin (Chair), Chris Diller (Vice-Chair), Jeri Anderson, Mary Crampton, Sue Greimel, Mattie Hawley, CeCe Klueh, Jeanine Radke, Rory Scott, and Denise Dunbar-Perkins, our COM representative. We appreciate your continuing prayers as we work toward finding our next pastor.