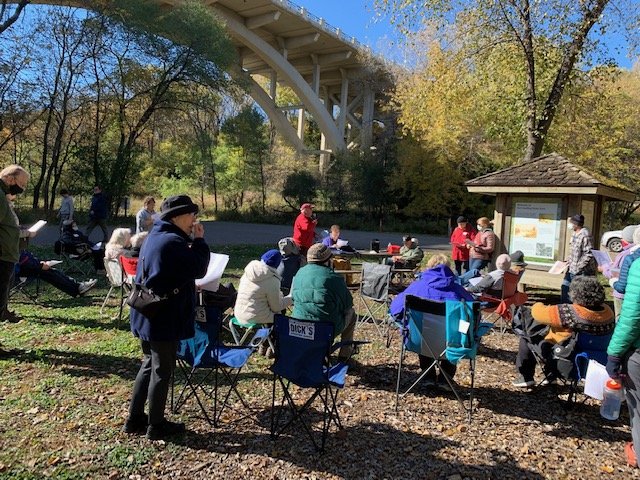 We visited Bde Maka Ska, village site of Cloudman (Marpiya Wicasta) and heard talks by Dakota descendent Syd Beane and Pond and Williamson descendent Jeff Williamson, along with talks by religious scholar Bruce Forbes and historian Thomas Shaw to learn about the Dakota agricultural community and the beginning of the Pond brothers’ mission work there in the 1830s.

Next we visited Pilot Knob  (Oheyawaha) “hill that is much visited” to learn about how it is a sacred site to the Dakotas, is the site of the 1851 Treaty of Mendota by which the Dakotas were forced to give up their land in south and western Minnesota, along with efforts by whites to appropriate, capitalize on and desecrate the site and its burials, along with current efforts to protect and restore it.

Finally we visited the Fort Snelling Prison Camp (under the Mendota Bridge) where 1600 Dakota women, children and elders were held in a concentration camp and over 125 died during the winter of 1862-63.  This was a result of the US-Dakota War in which many of the prisoners had protected whites during the fighting.  The interpretation at Fort Snelling Prison Camp was given by historian Corrine L. Monjeau-Marz, a descendent of the Dakota Chief Wabasha and by Jeff Williamson.

Thanks to all the presenters, and to Jeff Williamson, John Crampton  and Mary Koon who organized the tour.   Kudos to Ruth Dukelow, Sue Gjerstad and Karen Alonzi who setup the web site and online registration.

More tours are being planned for the spring/summer of 2022.